Oil on canvas, 118 x 197 cm, painted in 1648 for Pointel, a merchant from Paris whose collection primarily comprised paintings by Poussin. The canvas later became part of the collection of the Duke of Richelieu and was acquired by Louis XIV in 1665.

There are two other paintings by Poussin that deal with this subject, one of which was painted later, around 1664, possibly unfinished, and is kept at the Fitzwilliam Museum in Cambridge.

The painting at the Louvre Museum is one of the most famous, and certainly the most accomplished, works of Nicolas Poussin, forming part of the works from the period following his return to Rome in 1642, a period of 10 years during which he painted what would be considered during his time as the painter’s most perfect creations and are classed nowadays among the most pure expressions of French classicism.

Anthony Blunt notes that as of his return to Rome, the artistic vision of Poussin underwent a revolution: he continued to work with religious and classical subjects, but in both cases his interest was displaced, particularly in terms of subjects from the Old Testament: he abandoned the spectacular accounts of the Book of Exodus and dedicated himself to subjects that lent themselves to dramatical or psychological interpretation, such as that of Eliezer and Rebecca.

To shed light on this subject, it is useful to note the positioning of the painting in room 14, opposite “les Israélites recueillant la manne dans le désert” (“the Israelites gathering the manna in the desert”), a canvas of similar dimensions (149 x 200 cm), which was completed in 1639, i.e. before his stay in Paris, the subject of which was taken from the Book of Exodus (Ex 16, 13). When we compare these two works, we get the feeling that the paining with the “Manna” is the opposite of the setting of “l’agréable tableau” (“the pleasant painting”) spoken of by Félibien, the author of one of the biographies on Poussin, with its sombre tones and vexed attitudes in a more austere setting and without architecture.

Theme of the painting: the mysteries of Grace

This painting seems to be a piece of relaxation for Poussin as he painted it following the second series of the Seven Sacraments, which is relatively austere and was dedicated to his friend and patron Paul Fréart de Chantelou and painted between 1644 and 1648.

Pointel, after having admired the painting of Guido Reni, “La Vierge cousant avec ses compagnes” (“The Virgin sewing with her companions”), asked his favourite artist for a painting which, like the latter, would portray “several women, in which you can see different beauties”.

It was therefore not a question of departing from a specific subject, with the client reserving the right to impose restrictions on Poussin. The latter chose the biblical episode of the meeting between Eliezer and Rebecca at the well of Nahor (Genesis 24): Abraham asks his old intendant, Eliezer, to go to Mesopotamia to choose a wife for his son Isaac. Arriving near a well with his ten camels, he finds – among the women coming to draw water – Rebecca, who is “very pleasant to look at” and gives water to him and his camels. Eliezer, seeing a sign of Yahweh, gives Rebecca a gold ring and two bracelets.

In a typological biblical approach (notice the instances of foreshadowing of the Gospels in the Old Testament), this scene is foreshadowed in the Christian tradition of the Annunciation (celebrated on 25 March). We find it in the Gospel of Saint Luke (1, 26-38), when the Archangel Gabriel announces to Mary that she is going to bring a child into the world, Jesus.

Poussin recreates this scene which – aside from the solemnity of the biblical choice – does not present any event, by means of twelve young women in the shape of statues around the two protagonists, each with a different attitude, against a landscape adorned with architecture and eliminating the “bizarre objects” that are the camels (which was at the centre of a famous controversy twenty years later, in 1668, between Charles Le Brun and Philippe de Champaigne).

In reality, the faces of Rebecca and her twelve companions, with varied expressions, are a pretext for Poussin analysing the reactions provoked by the divine election: curiosity or emotion, confusion or jealousy.

The format of the painting

Pointel’s wish, a painting bringing together different beauties, was met: the work appears as a harmonious grouping of 14 main figures enclosed in a landscape adorned with architecture. This group forms a frieze, stretching from one part of the painting to the other, dominated by curves which contrast with the architecture and the different perspective angles which, by means of a network of orthogonals, recall the rectangular format of the work.

The scene unfolds right in front of the eyes of the viewer, occupying the lower two thirds of the painting; the group of people is represented on an equal footing and none are cut off by the edges of the work: Poussin prompts us to view the scene overall, in a frontal, very accessible manner, even though certain young women, further away, are partially hidden by companions which are closer to the viewer. The only thing extending beyond this frieze is the jug of the young woman looking at the viewer, also highlighted by the intersection of the lines of the thirds (see below).

Eliezer is at the centre of the work: the raised index finger on his right hand is exactly at mid-height, whilst the vertical separating the painting in two passes through the middle of his right leg, his body, his right shoulder and the middle of his turban, i.e. his head.

Each figure seems to have its place: calculated, distant and yet close to its neighbour. Rhythm is added to the scene by numerous insistent verticals, of which the tempo, set by the different jugs, may appear sometimes drawn-out, sometimes more hurried.

• The rule of three thirds

The application of this rule, which is found nowadays within the context of photography, helps place the elements of the composition and brings dynamism to the work.

As stated, the scene occupies the two lower thirds of the painting. The intersection of the lines of the thirds neatly places the emphasis on the group of five women to the left of Eliezer – notably the one carrying the jug and fixing the viewer’s gaze – as well as on Rebecca, as a counter-point.

The statuesque bodies, the necks, the heads, the eyes, the globe of stone situated on the heavy square column, and even Eliezer’s turban, define a universe subjected to the laws of the sphere and the cylinder, and the architecture and different perspective angles come to enclose the round forms in a network of orthogonals, knowing that the geometric network will ensure the triumph of reason.

• The truncated column with the globe on top

The directing lines of the work all seem to originate from the sphere situated on the truncated column, which, first of all, catches the viewer’s attention; very important and very curious: what does it mean? Why did Poussin permit the intrusion of this abstract element that, in theory, doesn’t correspond to anything in the painting’s space?

According to Milovan Stanic, it is about the joining of Virtue (represented by the square base) and Fortune (Fortuna in Latin, a Roman goddess who distributes her blessings haphazardly), one of the main attributes of which is the globe.

The well, location of choice for mystical weddings, locus fortunae, is marked by this emblem, which serves as the condensed commentary of the scene.

Rebecca, who meets her destiny before this well, also has a first name which means “patience”, a distinguished virtue.

Milovan Stanic also reminds us that the architectural emblem of Virtus and Fortuna is one of those favoured by Alberti (Leon Battista, 1404-1472): “a humanist emblem par excellence, combining human action into the world with moral ends”; and we know that, according to Poussin, the real subject of painting is the actions of man.

In this way, this curious element of architecture is seen as representing the eternal presence of divine providence.

As a final note: the artist has mirrored this with a similar architectural element, just to the left and behind.

The symbolic role of the jugs

The author has given rhythm to the directing lines by way of an interplay of jugs (at least 10) as if he was playing with the formal motif of the jug: here we can see vases, with forms close to that of the amphora, the pelike and the Greek stamnos or hydria.

The parallel with feminine forms is inescapable. In arriving at the well, Eliezer is interfering in a feminine world. We now understand why the painter did not want to include the bizarre and anaesthetic forms of the camels.

We can therefore reconcile the vase, the jug, with the idea of virginity: Is Poussin perhaps emphasising the innocence or purity of Rebecca?

Finally, we can once again find the theme of divine election and salvation in the water, which is omnipresent here and evokes the idea of baptism.

Below are the details of the work: 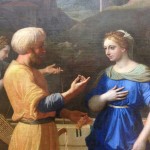 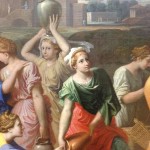 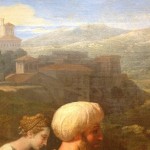 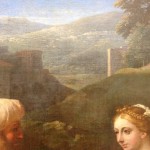 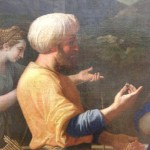 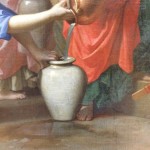 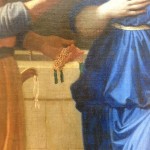 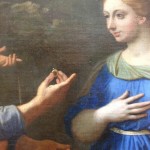 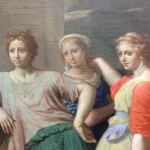 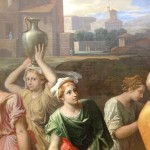 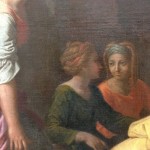 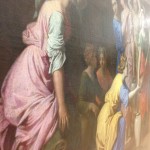 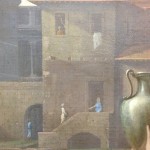 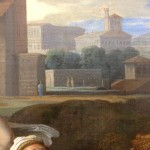 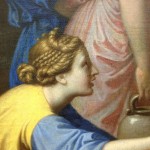 One thought on “Eliezer and Rebecca – painted for Pointel (1648)”