The paintings of Nicolas Poussin can be seen in several rooms at the Louvre Museum, principally the Richelieu wing (French paintings from the XVII century). It is the most impressive collection of the artist’s works, with more pieces than the National Gallery in London and the Hermitage in Saint Petersburg and offering an almost inexhaustible vision of the various “periods” of Poussin.

Nb. The list below is of course not static; display of Nicolas Poussin’s paintings in the different rooms depends on the current loans to other museums.

• Camillus hands over the schoolmaster of Falerii to his pupils (1637) 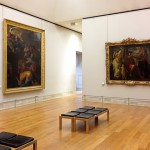 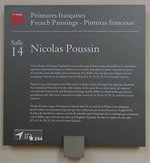 Room 16 is dedicated to the Four Seasons series

Paintings not on display